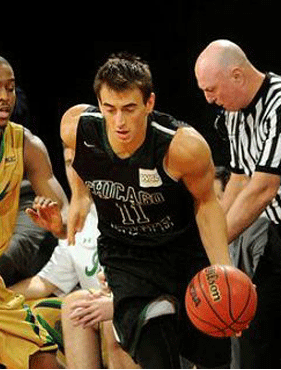 Jared Dimakos played basketball for Chicago State Cougars.  But, in 2015, while he was an NCAA Division One college basketball player finishing up his last year of school, he received the worst news of his life.  He was diagnosed with Osteosarcoma (bone cancer).  His collegiate and professional basketball career was over.  He suffered the next two years through seven surgeries reconstructing his leg and 160 of those days in the hospital overnight doing chemotherapy.

Once he surpassed this long and grueling journey, he felt assured that he had beaten cancer!  But, like many, he was far from feeling like himself both physically and mentally.

In his own words: “This is when Premier Regeneration Stem Cell and Wellness Centers offered an alternative route that I felt I could not pass up.

Premier Regenerative reached out to me with the offer of a six-week program, where I would be given the opportunity to receive three different types of treatments.  The treatments would consist of a daily hyperbaric chamber dive, a weekly IV Vitamin Therapy, and lastly a stem cell injection into my replaced knee and shin area.

With these three treatments combined I was able to see a very quick and noticeable change in myself both physically and mentally.  The improvements I began to see from the daily hyperbaric and weekly IV Vitamin therapy treatments were increased use of my foot after having severe case of foot drop along with a large decrease in daily pains from walking.  Also, mentally it helped me with my sleeping patterns which in return helped me get much of the daily energy I used to have back.  Along with the stem cell treatment which gave me very promising natural feeling back into my newly replaced knee.

After the six-week program had finished not only was I feeling the best I had ever felt since the diagnosis both physically and mentally.  I had also in this short amount of time had found a family with Premier.”

Not being a stranger to the world of acute and chronic pain, Jared is passionate about getting out the word that there are alternative treatments to opioids and he is supporting the Global Pain Initiative’s move toward finding a non-opioid cure for pain.