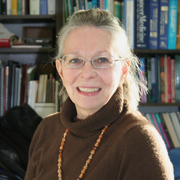 Professor Emeritus of Pharmacology and Adjunct Professor of Oncology at University of Alberta, Canadda

Dr. Theresa Mary Allen, Ph.D., FRCS is a Professor Emeritus of Pharmacology and an adjunct professor of Oncology at the University of Alberta, Canada. She is also Co-founder and Strategic Advisor for the Centre for Drug Research & Development, Vancouver, BC and an Adjunct Profession in Biochemistry & Molecular Medicine at the University of British Columbia, Vancouver, BC. She has been active in the drug-delivery field for over 30 years and has made important contributions to the development of long-circulating liposomes and ligand-targeted nanomedicines for anticancer drugs and gene medicines.

Dr. Allen has over 200 peer-reviewed publications and is an inventor on several patents. The product Doxil® (Calex® in Europe), the first anticancer nanomedicine approved in the world, came out of pioneering research in her laboratory at the University of Alberta. She has also been active in the area of new drugs from natural products, which has resulted in two drugs proceeding into Phase II clinical trials. Her recent work in developing ligand-targeted therapeutics for small molecule therapeutics and gene medicines is at the leading edge of this exciting new field and the methods she developed are widely used throughout the field.

Dr. Allen received her R.T. in Medical Technology in 1961 from Ottawa General Hospital and then went on to earn her Bachelor of Science degree with Honours in Biochemistry in 1964 at the University of Ottawa. Continuing her education, she received her Ph.D. in Oceanography in 1971 from Dalhousie University.

Dr. Allen is a founding member and strategic advisor of the Centre for Drug Research & Development (www.cdrd.ca), which is a novel hybrid organization devoted to advancing promising medical discoveries from academia to a commercially attractive stage. The Centre for Drug Research and Development (CDRD) evolved from the recognition by the Founders of the pressing need to improve the translation of medical discoveries made in the universities and teaching hospitals into new drugs and technologies that result in economic and health benefits for Canada. CDRD takes a unified, coherent approach to identifying, advancing, and commercializing innovative life science discoveries via a unique structure that connects scientists, health care providers, and industry.

Dr. Allen has been active throughout her career in mentoring graduate students, summer students, and technologists. Her former graduate students occupy senior positions in academia and industry throughout the world. She has also been a popular classroom teacher in courses in Pharmacology and Pharmacy.